The first day of the workshop involved folding stitching and bundling various papers and fabrics with vegetation from the kitchen and garden. The bundles were then simmered  and most left to steep overnight. Other papers were prepared for the following day.

The results were some colourful pages and some lovely strong prints from leaves and flowers. We all made discoveries and gained inspiration for future work. 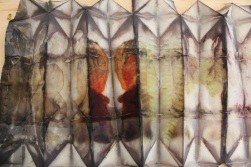 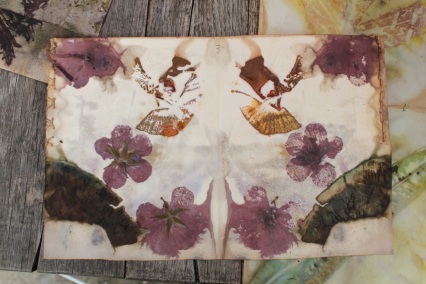 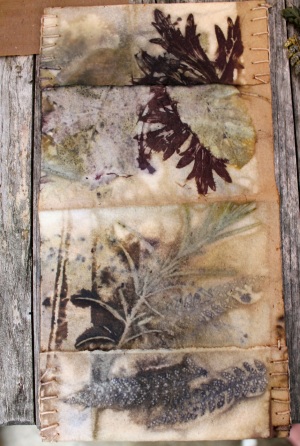 On the second day papers were steamed and more prints revealed. Dan kept us supplied with lots of refreshments and provided a feast of home made focacia breads to go with our lunch of soup, hummus, harissa and salad.

After lunch paper pages and pockets were stitched together to make books. 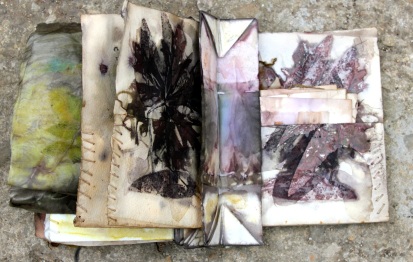 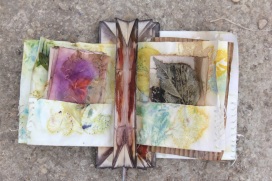 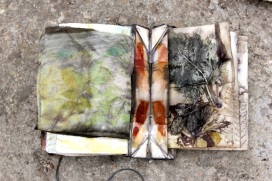 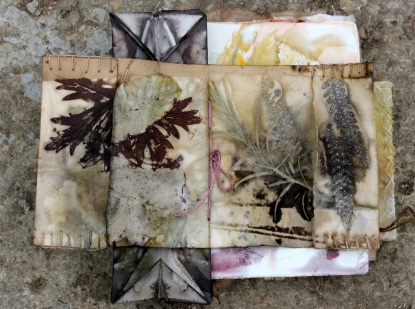 At the end of a lovely weekend, everybody went away with their individual books and pieces of silk and cotton.  I think a good weekend was had by all.

New Year resolutions usually come out of guilt and feelings of inadequacy are to be avoided and as someone who suffers winter downers I am making plans to be kinder to myself and the world and try to do more of what makes me feel good. I have been thinking of positive plans for the year as I want to build on all the good things that came out of 2013.  Already I have bookings for the Mud resist course in July and the Bundles and Books in October which is heartening.

When I moved here from London I decided to get a dog to motivate me to go for walks and even during the darkest and miserable days of mid winter I have no regrets. The leaf printing has added a deeper sense of mindfulness to my walks and focused my attention on the changing seasons, the many varieties of trees and plants along the path and a deeper sense of place.A walk today found aconites, snowdrops coming into flower and the sun made a welcome change from the cloud and rain filled days of recent weeks. 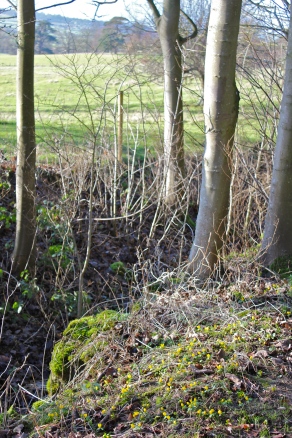 This blog has added a discipline to my work and a more thoughtful approach to my practice.  I have a tendency to try and do too many things at once and not follow and record an idea to a conclusion. The discovery of new techniques can take me off on tangents leaving work unfinished and ideas unfulfilled.

I have been continuing with paperwork, folding, printing steaming and steeping ideas developing around the kitchen table. Boats, boxes, maps all conjuring up memories of far away places and journeys I have taken in my life.

Dan returned from his weekly commute to London with samples of different papers from Atlantis Arts, some rusty nails in a bag and some other treasures for winter experiments. But first we have decorating to do so a weekend of sand paper, paint brushes and rollers and the living room has been transformed into a brighter place for the gloomy months.

This morning I woke up to the first frost of the winter.  The dog walk took us out into a crystal covered landscape. No pictures, (having forgot my camera) but many more frosty mornings ahead.

Finally some time to work. Which papers will produce the best colours? No rust at this stage as this may confuse things too much just paper leaves and steam. First into the steamer are the Rives BFK,  Aquarelle Arches 185 gsm HP, and Bockingford water colour 150gsm NOT ,with Acer palmatum, Prunus and Poplar italica

After half an hour first out of the steamer is the Aquarelle Arches which is showing bright colours of green, yellow and blue, The paper is sticky with size. 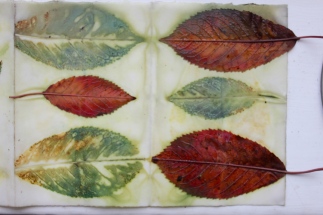 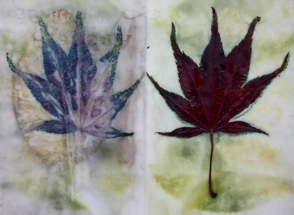 another half an hour the Bockingford which has more subtle prints and natural colours.

The heavy weight Rives BFK has produced unexpected rust notes. Quite different from the other sample of Rives I was given which was similar to the Arches sample. 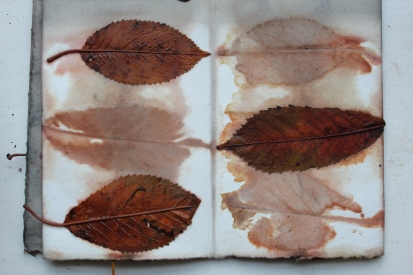 Should really do more work on paper, though I’m really in the mood to look at the pile of sample pieces I have been accumulating and piecing them together.

I’ve had a lovely day yesterday playing with different types of paper to see how they take leaf prints. I know others who mordant paper with aluminium acetate to get lovely clear prints but I am hoping to find papers which give me the results I’m looking for without mordanting.

My good friend and artist Duncan Clarke gave me two sheets of acid free cotton rag paper to try and I already had sketch books of various types of water colour paper. I was also given  a bag of lovely red Virginia creeper to add to the Prunus, Amelanchier, Cotynus and Sumach leaves I gathered on my morning walk with the dogs.

After a day simmering and steaming I got some lovely prints and such a variety of colours. Duncan’s paper really pulled out the yellows and turned the Virginia creeper green and blue. My smooth water colour paper produced pinks and blues though not such clear prints and my sheets of rough water colour paper made very blurry images so I have left it folded up hoping for more.

I have folded some thread book boxes using standard printer paper and put leaves in and around them and they are now in the steamer with bits of metal. The challenge will be to find a strong, printable and light enough weight paper to make the folded books. There seem to be lots of info on the web on making simple origami books which I have also tried successfully using heavier weights.

The folded printing paper turns out to be promising though very fragile when wet. Most of the other papers are too heavy to fold into boxes except for a cartridge paper which didn’t take a good print. onion skins, sumach and Prunus turn out to be stars of this show.

A lovely Autumn day and I have been taking photographs. Here is my prototype of the Chinese folded thread book. 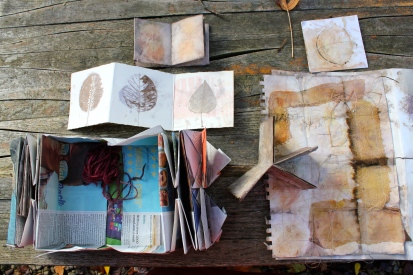 This could be the final outcome of the 3 day Bundling and Books workshop. It was a lovely thing to make even in newspaper and everyone could make their own very personal book using their lovely bundled papers and stitch or glue it all together.

It will have lots of compartments to put notes and the threads and string which get dyed along the way. We will also aim to make a  fabric cover which will also be stitched and dyed during the workshop. Now I just have to find the right materials and make sure this is all possible in 3 days.